Want to pledge allegiance to the Drumpf? Clash with Caspian? Scared of the stickers on your mailbox? Let's hear it.
Post Reply
56 posts

That data dont look too good.

how Sweden was doing it wrong and going to kill 10% of their population?

the doomers criticism as Swedes mostly got on with life? I

Sweden is..... below the average per capita death rate 2 years on.

Moreover, the moderate positive correlation between mask usage and deaths in Western Europe also suggests that the universal use of masks may have had harmful unintended consequences.


The ever-sharp Zacki on Twitter points to this intriguing 2018 study out of New York. The authors administered PCR tests to 2,685 people at a tourist attraction in New York City, between the months of January and July. Over 6% tested positive for one of seven common human respiratory viruses. In the winter, human coronaviruses were the most common; in the summer, rhinoviruses took the lead. By design, the study targeted healthy populations, and so we must imagine that it substantially understates the true rate of virus infection.


The authors don’t find a significant difference in the overall prevalence of positivity between winter and summer. In their small sample, it’s only the mix of viruses that changes. This is another piece of evidence in favour of my crazy theory, that a great part – perhaps a majority – of spring and summer allergies are in fact persistent low-grade rhinovirus infections.

Other studies, particularly on rhinovirus, find even larger incidences of infection. There is this paper, which looks at rhinovirus in infants and finds that 20% of their sample are asymptomatic positives; or this case-control study of all ages, which finds rhinovirus in 17% of their asymptomatic controls.

For perspective: At the height of the alpha wave in the United Kingdom, only about 0.3% of the population was testing positive for SARS-2 every day. School antigen testing in Germany, which is done multiple times a week and finds nearly every detectable infection in school-age children, found Delta 7-day incidences of around 1%, and Omicron 7-day incidences peaking in February at near 4% in specific age cohorts (see the the graph on p. 5). The allegedly hypercontagious SARS-2 looks like it was doing substantially worse, in other words, than garden-variety human coronaviruses in the same month in the New York study.

Respiratory viruses are extremely pervasive; they’re everywhere and this is totally normal. What isn’t pervasive, is virus testing. We’ve only ever tested widely for a single virus. So much of Corona mythology depends upon presenting data in isolation from what we know about the behaviour of all the other pathogens we’ve lived with for centuries. Our governments have spent two years hyperventilating about incidences of infection that turn out to be minuscule, or at worst normal, when compared to the other pathogens that infect us. This should also make you very, very sceptical of uncontrolled studies cataloguing alleged Long-Covid symptoms. If we tested this widely for rhinovirus, imagine all the totally unrelated symptoms we’d find in our vast pool of positive results.

For the both of you that read my ranting to the void, excellent guest article that outlines the morality of informed consent in medicine. Wisps of compulsory military service in there too.

Ok im puting this in the c-19 thread because 1. not really a better place and no need for new thread and 2. the parallel to draw to ivermecton is a bright red line with circles and exclamations

Backsotry for those under rock: Someone leaked a draft majority opinion from the supreme court of the US overturning Roe v Wade & Casey, the two SC decisions that protected abortion rights in this country. This is a big deal as USSC decisions do not leak, and the leaker is clearly trying to influence the fall elections.

You cant even make this shit up.

They of course got roasted, now that dissenting opinions are allowed on the twater. I was not the only one to think the simulation is glitching.

They of course had a weak ass reply: 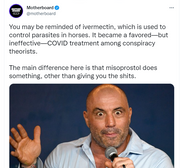 You know, because the ivermecton is safer than aspirin, and the Misoprostol is literally so toxic it will* cause fetal death and induce a miscarriage.
*allegedly, I have not fact checked this claim or drug as its immaterial to the logic.

So Zach et al., yall going to be logically consistent and stay on the logical side here and say 'maybe people shouldn't take veternaly products' OR are yall going to go

and condone this practice? If you all hard core lefties endorse taking a literal poison for one malady and condemn one of the safest medicines on the planet for another, well you are not a logical person. That puts this country in quite a predicament when people like that are allowed to vote & hold office.
Last edited by goIftdibrad on Wed May 04, 2022 7:50 am, edited 1 time in total.
brain go brrrrrr
Top

in case tweet goes away...tried to upload to post image but server errors all over the place on these two posts

Desertbreh wrote: ↑Thu Sep 15, 2022 4:28 pm I'm happy for Brad because nobody jerks it to the Miata harder on this forum and that is the Crown Prince of Miatas.

Jump to
Powered by phpBB™ • Design by PlanetStyles